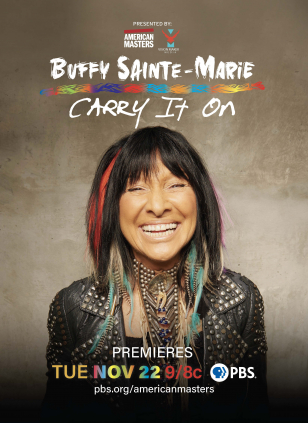 After a world-wind of successful premieres, the film, Buffy Sainte-Marie: Carry it On finally launched in the U.S. at the DocNYC film festival.

This amazing full feature documentary, directed by award-winning director, Madison Thomas will make its US television broadcast premiere on PBS!!

The Guardian has published a wonderful full interview and review of the documentary.

One of the most compelling and versatile filmmakers working in Canada today, Madison Thomas was named one of Playback Magazine’s “Five Filmmakers to Watch” in 2019. A storyteller of mixed ancestry (Ojibwe/Saulteaux & Russian/Ukrainian settler), Thomas is based out of Winnipeg, Manitoba in Treaty 1 territory. She has a rapidly growing number of credits as a writer, director and editor across several genres, formats and platforms.