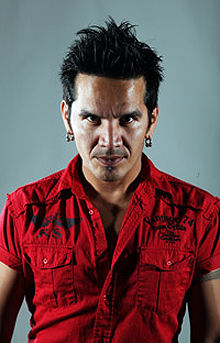 Michel Bruyere (Drums)Known for his heavy-handed beats, Michel Bruyere uses his experience in rock, funk rock, country and blues to create his distinct sound. Based in Vancouver, the informally trained Ojibwe drummer kicked-off his music career in the early 90’s as a session player and performer. Michel has played with major acts such as Eagle & Hawk, C-Weed Band, and Keith Secola in the USA. Passionate about bringing spirituality into everything he does, Michel is currently touring with Bruthers of Different Muthers and Buffy Sainte-Marie.